Bison Archives – named in tribute to the Bison Film Company, an early motion picture studio (formed in 1909) that produced Westerns featuring Native American casts – was collected by this author over a 40-year period of time. About a third of the entire collection came from film studio research libraries where the author worked part-time during the 1980s.

While working at these libraries there was turmoil within the film industry. This was the time when the studios were downsizing, modernizing, and were developing into corporate entities owned by other non-motion picture or television companies.

Several of the research libraries were lost altogether, such as those of Columbia and Republic studios, while others were put into storage and later sold to George Lucas (Paramount and Universal), Francis Ford Coppola (RKO) and to Dreamworks (Goldwyn).

The 20th Century Fox library was twice placed in storage and almost sold. The MGM and Warner libraries are now together in a building in Burbank and will hopefully find a permanent home with the Art Directors Guild.

LIBRARIES USED BY ALL STUDIO DEPARTMENTS 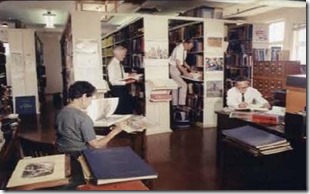 Research libraries began in the early days of the film industry and were used by writers, producers, directors, actors, costume designers, art directors and even the heads of the studios because the libraries contained just about any information on any subject, historical or contemporary, that was needed by all studio departments.

While working at these departments, the author was encouraged by his department heads to quietly gather any information on the history of the motion picture and television industries as well as on the City of Los Angeles and all of its surrounding cities. The goal was to accumulate and save many various subjects such as film locations/sites, buildings, houses, estates, railroad and streetcars, theatres, etc. before the libraries were sold, put into storage or destroyed.

Of special interest to Culver City history, the MGM Research Library contained a great many files on Culver City, its studios and landmarks. Thanks to its department head, James Earie, this author was able to save many of the library’s files containing photographs, clippings and memorabilia on such subjects as the railroad and streetcars that were Culver City landmarks. [see photo below]

Many of the location photographs were taken by the Location Department and used by the art department and set dressing department to prepare the location set for use as a background in a film. Thanks to the location departments, many of Los Angeles’s landmarks, many long disappeared, are documented for historians’ use to this day.

Location photographs and studio photographs contained in the research libraries helped to make Bison Archives an important source of unpublished photos on the history of Culver City as evidenced in Julie Lugo Cerra and Marc Wanamaker’s latest book, Movie Studios of Culver City. 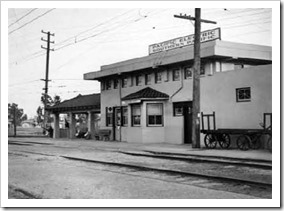 The research libraries that still exist today are in danger of being sold, broken-up, or lost to those of us who work in the film and television industries and the Art Directors Guild is trying to find ways of

preserving them for future filmmakers who are still in the need for “hands-on” research instead of “internet” sources that are not as comprehensive as the “old fashioned” research libraries. [For more information on Marc Wanamaker and Bison Archives, go to http://www.bisonarchives.com/.]

Ed. note: In March, 2012, The Academy of Motion Picture Arts and Sciences announced that it has acquired more than 70,000 photographs from Marc Wanamaker and the Bison Archives.

Adding to the more than 10 million photographs in the holdings of the Academy’s Margaret Herrick Library, the collection features rare images from more than 100 major and independent studios, many of which ceased to exist past the 1920s, including Biograph, Edison, E & R Jungle Film Co., Essanay and Vitagraph.

“These photographs, so many of which focus on behind-the-scenes studio activities, combined with the existing Herrick photographs, will provide unequalled coverage on all aspects of Hollywood filmmaking,” commented Academy COO Ric Robertson.