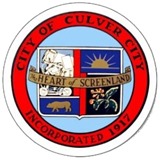 Incorporated in 1917, Culver City has been a force in the entertainment industry from the beginning. Host to three major movie studios, many production companies and support services, Harry Culver’s dream city remains “The Heart of Screenland.” Classic movies like Gone With the Wind, Citizen Kane, The Wizard of Oz, Meet Me in St. Louis, and many others were filmed on our studio lots, along with many noted television productions. Culver City history has been captured by production companies, (i.e. Laurel and Hardy shorts) that continue to film on city streets.