As we approach Culver City’s Centennial, it seems appropriate to look back to the early days of filmmaking in the city – the industry that Harry Culver first encouraged, and which led to the city’s motto of being the “Heart of Screenland.” 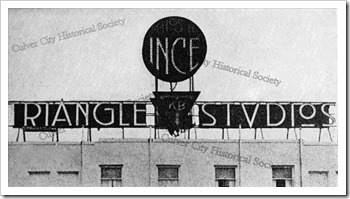 When Thomas Ince and Harry Culver were planning the new Ince-Triangle Studios in 1915, a metal sign was designed to announce the new studio by placing it on the highest building on the new lot.

The Ince-Triangle Studio would be the first studio built in Culver City. The new sign would show the names of the companies that represented the Triangle Film Corp: NYMPC/KB (New York Motion Picture Corp. and Kessel and Bauman, founders of NYMPC) and producer-director Thomas Ince.

The sign was first placed on top of the three-story administration building facing east and west on Washington Boulevard. At that time there were few buildings in Culver City and the sign could be seen for miles around.

“ART” AND “LEO THE LION” ENTERS THE CITY

By the end of 1918, the Triangle Film Corporation split up and Thomas Ince moved his operations to his very own studio a quarter mile east further on Washington Boulevard (today it is The Culver Studios). 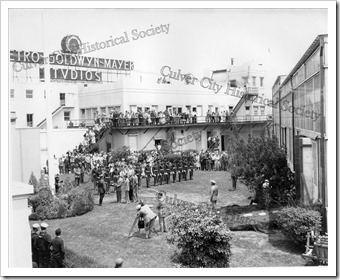 At the end of 1919, the new Goldwyn sign was placed on top of the building. The new sign’s logo announced: “Goldwyn Studios,” topped with the head of a lion encircled with the latin words Ars Gratis Artis (“Art for art’s sake”) and illuminated with light bulbs. The lion, of course, became the iconic “Leo the Lion.”

METRO-GOLDWYN-MAYER CREATED AS A MERGER OF STUDIOS

In 1923, the Goldwyn Company (Samuel Goldwyn had left his company in 1921) merged with Louis B. Mayer Productions and by 1924, added Metro Pictures Corporation renaming the company, “Metro-Goldwyn-Mayer.”

A new sign had to be made which replaced the former Goldwyn Studio sign on the main administration building that once housed the Triangle and Goldwyn offices. The new sign incorporated the former Goldwyn “Leo the Lion” round sign with the designation, “Controlled by Loew’s Inc.” (the Holding company of Metro Pictures Corporation) underneath. This “circle” sign sat atop the letters “Metro-Goldwyn-Mayer Studios.” 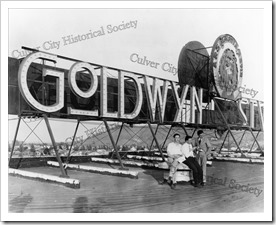 By 1939, the sign was moved to the tallest stages on the lot and one of the tallest buildings in Culver City at that time. From that vantage point, the iconic sign could be readily seen for miles around. It stayed there until it was moved again in the 1980s to the newly-built Filmland Corp. Center building, across the street facing the studio lot. The sign had been modified by this time displaying only “Metro-Goldwyn-Mayer” with a newly-designed round “Leo the Lion” on top.

In 1992, MGM left Culver City and moved to Santa Monica where the sign was to top their new corporate office building, but due to special sign regulations in Santa Monica, the sign never was placed on their building but went into storage where it sits today. The historic studio lot carried the Lorimar name at the end of the 1980s, until Sony Pictures Entertainment became the owner in 1990, and the sign was changed to read Columbia Pictures on one side and Tri-Star Pictures on the other.