Although the film took place in a small town in the Deep South in the late 1940s (and was loosely based on two-term Louisiana governor, Jimmie Davis), sharp-eyed readers will notice the tell-tale L.A.-based signage for “Culver Center Drugs” (above the “Bo Gillis” banner and below the “Market Basket” sign in the middle of the above photo). Below: Culver Center Street as “decorated” for the MGM film “Ada,” which was set in the late 1940s. 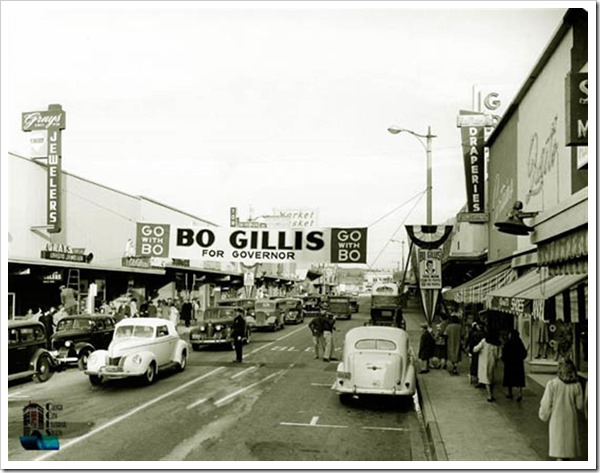 A Variety of Stores

The Market Basket grocery store announced, “With the opening of our new super market in Culver Center, Market Basket enters for the first time in the Western Section of Los Angeles. This new store is one more step in the expansion program of this grocery chain.”

A New Concept in Shopping

Throughout the next twelve years, Culver Center lured major stores to

Culver City. This was the original idea of many new shopping centers built after World War II. They would be modern, easy to get to with ample parking, advertising large clean stores.

By 1950, the W.T. Grant dime store opened at 3844 Culver Center St., along with some new stores advertising Culver City as a “Shopping Center” on the West Side of Los Angeles.

By 1961 Martin’s Music opened at 3870 Culver Center St. along with Gallenkamp Shoes store.

On October 8, 1961, Culver Center celebrated its 12th Anniversary (1949-1961). This coincided with the MGM production of Ada, using Culver Center for its “main street.”

For more information on the history of Culver Center, click here.