by: Sharon Shore, Costumes Chair
When Culver City native Carol Ball attended the MGM auctions in 1970, she was a teenager looki 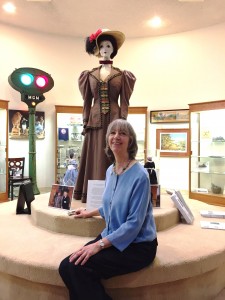 ng for costumes to wear for Halloween. Among her purchases was a two-piece dress worn by Marjorie Main in MGM’s 1946 production of The Harvey Girls. The film is about a group of young women, including Judy Garland, who head out West to work as waitresses at the Harvey House restaurants. Marjorie Main is seen in this costume in the very first scene of the movie as the girls are singing the popular “On the Atchison, Topeka and the Santa Fe.” But Carol never wore the costume and it spent the next 40-some years in her cedar chest. In 2011, Carol, a Life Member of the Society, decided to donate it to an organization that she knew would treasure it: the Culver City Historical Society! “How wonderful to finally see my donated Marjorie Main Harvey Girls costume on display for all to enjoy,” said Carol. “It’s so good to know that it will be cared for and stored by our own historical society. It’s another fun reminder of those summer days I will never forget in 1970 that I spent at the MGM auction.” The 1890s costume, now exhibited through July in the Archives and Resource Center, was designed for the film by Helen Rose. The display also includes photos of Byron Harvey Jr., grandson of the Harvey House founder Fred Harvey. The display and selected accessories were created by Denice Renteria and Costume Chair Sharon Shore.