You’ve seen it all over town. On buildings, municipal vehicles, City Council Chambers, official city documents, city flags, and even on the stainless steel sculpture “Filmstrip U.S.A.” in front of the Veterans Memorial Building. But did you know that this seal has been used for 80 years? 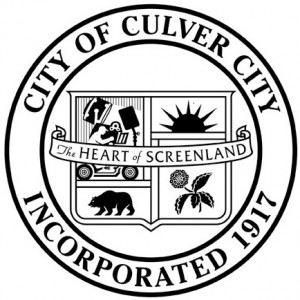 That ordinance cited above, signed by Mayor Frank H. Dobson, also included a further description of the seal. It called for unequal sized sections of the shield, with the upper left and lower right being about double the size of the others. It even specified that “the motion picture camera equipment in the upper left hand quarter includes a cameraman upon a wheeled camera dolly, a klieg light turned on, and a reflector screen. The stylized sun in the upper right hand quarter is about 2/3 risen above ground level, and displays seven rays.” The colors are also defined, calling for the upper left illustration “in powder blue and white with the linework in black.” The golden sun is to be upon a “dark blue field.” The city flower, the lantana, was to be illustrated in red with green leaves.

Our seal serves as more than a civic identifier, but also as a communal unifier. That it celebrates 80 years this year is a testament to our city’s tradition and history that we hold close.