As we celebrate Culver City’s Centennial, it’s natural to wonder how the city came to be, and what it was like before 1917. 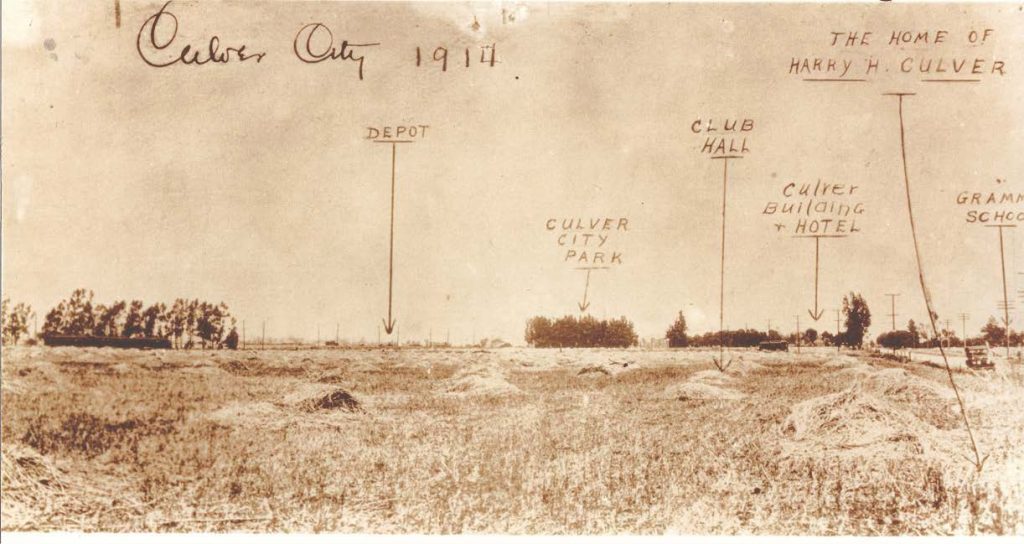 Open land in 1914, once occupied by ranchos, with Harry Culver’s plans for the future of the city. (Culver City Historical Society Collection)

A quick history of pre-incorporated Culver City: Home to the Gabrieliños (nee Tongva) native peoples, it was part of the ranchos that subdivided present-day Los Angeles County in the early 1800s. Barley, beans, and grapes were the major cash crops, along with cattle and horses, but soon motion pictures became the city’s industry. Harry Culver had already pinpointed the area that would make his real estate fortunes due to it being halfway between downtown Los Angeles and Abbot Kinney’s “Venice of America” seaside resort, with the Pacific Electric Railway “Short Line” depot at Venice and Bagley Avenue already in place, and announced his plans for a city at the California Club on July 22, 1913. Then Culver famously saw Thomas Ince filming a Western along Ballona Creek, convinced Ince to move his studio from Pacific Palisades to Washington Blvd. and Jasmine in 1915 where the colonnades of Ince Triangle Studios still stand, and “The Heart of Screenland” was off and running. 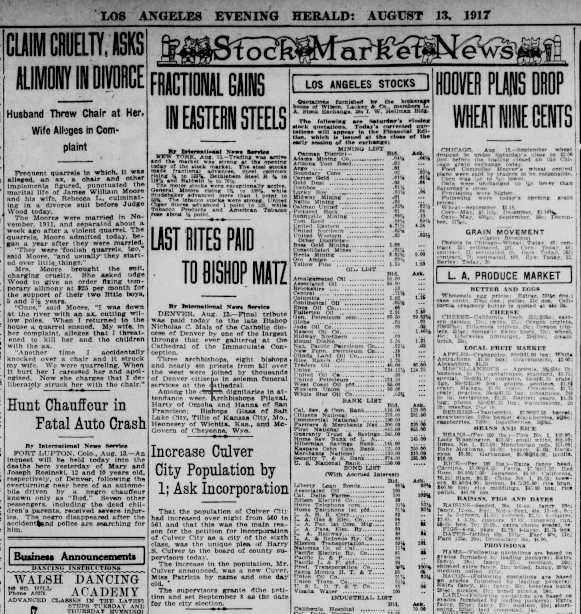 To hear the Los Angeles Evening Herald tell it, the impetus for Harry Culver to seek a vote of incorporation for his new city wasn’t to found a city bearing his name, to make his fortune, or to improve his standing in the region. Instead, it was the birth of his daughter.

A headline on August 13, 1917, in the Herald read, “Increase Culver City Population by 1; Ask Incorporation.”

“That the population of Culver City had increased over night from 560 to 561 and that this was the main reason for the petition for incorporation of Culver City as a city of the sixth class, was the unique plea of Harry S. Culver to the board of county supervisors today. The increase in the population, Mr. Culver announced, was a new Culver, Miss Patricia by name and one day old.” 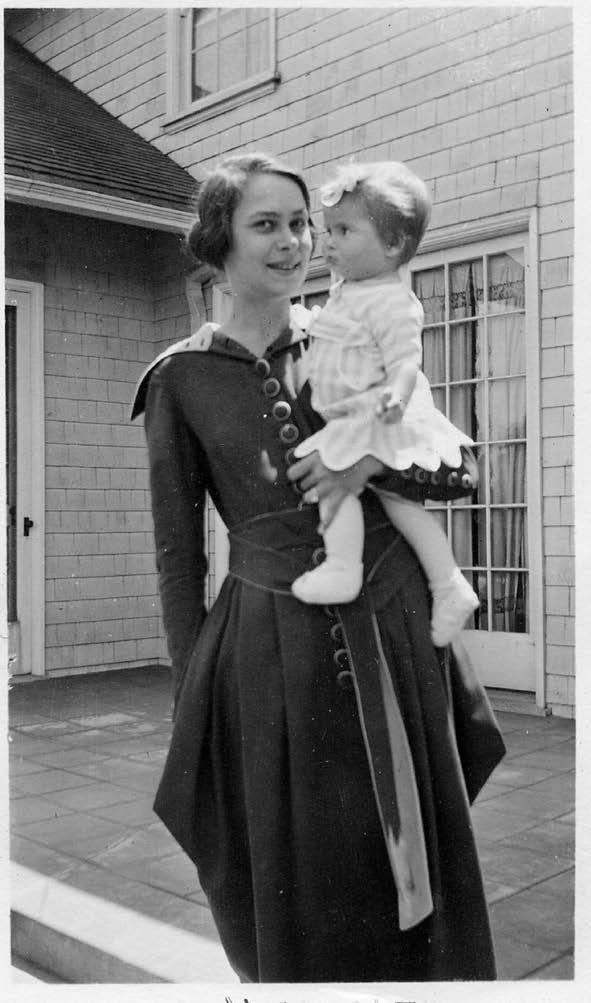 On September 8, 1917, the Herald mentioned that the election was being held: “Polls opened at 6 this morning and will close this evening at 7. There are 560 residents in Culver City. Harry Culver, the founder of Culver City, predicted that the vote in favor of incorporation would be unanimous.”

The next entry in the Herald about the nascent city was on September 12, 1917, with the headline, “Culver City Ready for Big Festival.”

“The Culver City Chamber of Commerce is planning an all-day carnival to celebrate the city’s incorporation and the sixteen-acre addition to the Triangle Film corporation’s studio at that city, already the biggest studio in the world.”

By 1918 Triangle Studios were sold to Samuel Goldwyn, with Ince already having moved to what is now The Culver Studios, with “The Mansion” (or “Colonial Administration Building”) the first to be built on the lot, and in 1919 Hal Roach built his studio on Washington across from what is now the Culver City Expo Line station. In 1924 Goldwyn Pictures merged with Metro Pictures and Louis B. Mayer Pictures, forming Metro-Goldwyn-Mayer Studios, better known as MGM.

As for what Culver City was like prior to incorporation, the best we have is this photo, on page with 1914 written on the photo itself by an anonymous cartographer. Culver Grammar School, noted on the right of the photo, is now home to the Culver City Unified School District offices, next to Linwood E. Howe Elementary. Harry Culver’s home was originally located on Delmas Terrace before it was moved to Cheviot Hills. The Culver Building and Hotel of course is the iconic triangular building at Culver and Main streets, which opened as the Hotel Hunt in 1924. “Club Hall” became the Legion Building, built in 1930, which still stands on Hughes Avenue, just south of Venice. Culver City Park is what’s now Media Park, near Venice and Culver boulevards. And the depot is what’s now the Expo Line’s Culver City Station.

Just as it’s hard to imagine Culver City back when it was barley and bean fields, it’s impossible to conceive of what the area will look like in another hundred years. We can only hope that it will still be going strong, and that its magnificent history will continue to be preserved and appreciated by people such as yourselves, our most valued members of the Culver City Historical Society.