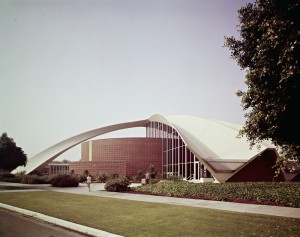 The Culver City Historical Society invites its members and the community to learn about the exciting changes planned for Culver City High School’s landmark Robert Frost Auditorium at the Society’s April General Meeting and Program.

Robert Frost Auditorium, designed by architectural firm Flewelling and Moody and completed in 1963, was built in the Organic Modern style, and featured a ground-to-roof black glass façade, non-ornamental brick exterior and distinctive semi-circular pleated reinforced concrete roof that, when viewed from above, resembles a massive handheld fan. Futuristic for its time (it has been featured in the science-fiction films Gattaca and Woody Allen’s comedy sci-fi film Sleeper) and continually heralded as one of the best-designed Modern structures, the building survived the 1994 Northridge Earthquake unscathed, but nevertheless has suffered from the ravages of time and some ineffective internal systems.

Hodgetts + Fung Design and Architecture Firm, which recently completed work on the Nashville Ascend Amphitheater alongside the Cumberland riverfront, will join the Historical Society at its April General Meeting and Program on Wednesday, April 20th 7 p.m. in the Multipurpose Room of Veterans Memorial Building, 4117 Overland Avenue in Culver City.

The firm’s co-founders Craig Hodgetts and Hsinming Fung are scheduled to discuss their ambitious renovation plans for the interior of Robert Frost Auditorium, including the expansion of back-of-house spaces, a steel proscenium arch, handicap access and new air conditioning, lighting and electrical systems.

About Hodgetts + Fung Design and Architecture: Hodgetts + Fung is a studio made up of architects and designers with special expertise in the design of unique places for learning, cultural events and civic functions. With complementary backgrounds in urban design, architecture and industrial design, partners Craig Hodgetts and Hsinming Fung have a singular ability to integrate divergent needs in order to create memorable designs for significant projects. Their approach to this work is multifaceted – embracing visitor experience, technology and iconic presence in a disciplined process resulting in a bold, uncompromising architecture. This method has been instrumental in achieving a fusion of architecture and contemporary culture, which advances the objectives of our clients as well as their communities.