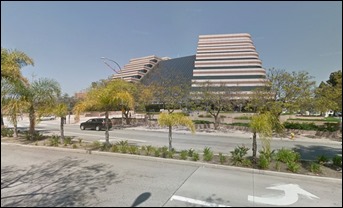 CULVER CITY RENEWAL IN THE 1980S

The 1980s was a time for renewal in Culver City and the resident studios were already beginning to remodel and modernize their lots for the future of film and television production. It was also a time when the Metro-Goldwyn-Mayer Studio was in turmoil, with takeovers, and stock manipulations resulting in the former MGM Studio lot being taken over by Lorimar Pictures, eventually becoming MGM/UA.

In 1984, developer Bruce Mallen and his wife Carol envisioned Culver City growing to be an important center for film and television production in the future. Using international financing, the Mallens went ahead and entertained the idea of building a major landmark building that would house entertainment businesses and support services.

After securing the design and architectural plans for the construction of this “Dream” project, the Culver City Council and Chamber of Commerce embraced the idea. Such a landmark building would bring businesses and more jobs to the city.

Groundbreaking launched the construction of the Filmland Corporate Center with representatives of the owner, Filmland Development Inc., and architect Maxwell Starkman Associates in attendance. Chief Executive Officer Bruce Mallen and Carol Mallen, Executive Vice President, announced to the press that the property located on Washington Boulevard adjacent to the MGM/UA studio lot would be the new “heart” of the Culver City entertainment industry.

The 820,000-square foot facility was slated for a December, 1985 opening. The horseshoe-shaped eight story building would be the largest building in Culver City’s history. The new building was designed to specialize in the area of support services to film and television companies and individuals engaged in the development, financing and production of motion pictures, television, video and other entertainment-related activities.

In January of 1985, the steel skeletal structure of the Film Corp development was pictured in the Culver City News with a caption reading: “Set to open this fall, the building provides an interestingly geometric, almost art deco look to the Culver City skyline.”

By May, press reports said the building was still under construction and it was reported to be “The Cornerstone of Redevelopment of Culver City.”

There was controversy in the city during this construction period. Some said the building was too large and dwarfed the small town of Culver City. Others liked the building and said that this is what Culver City needed to recover its status as a film and television production center.

Pink granite was installed on the terraced front of the building while Executive VP Carol Mallen announced that the building would include a health club, a restaurant and screening rooms, as well as commercial outlets on the ground floor. Architect Shree Mate, the principle designer of Filmland, said he wanted the building to “recall the golden age of Hollywood.”

By July, it was reported that “MGM/UA Leases Whole Floor of Filmland Center.” A lease was signed for 20 years for a total of 50,000 square feet of the third floor. The space would house the headquarters of MGM/UA’s motion picture marketing and distribution divisions when they moved in the following year.

The center was also looking for moviemakers and television production companies as tenants as well as those that service the industry, such as lawyers, accountants and agents.

GRAND LOBBY AND LANDSCAPED ATRIUM COVERED BY A CANOPY OF GLASS

The Filmland Corporate Center building design included a front entrance contour that surrounds the motorcourt where valet, taxi and limousine services are available. Beneath the street level lie three floors of secured parking for up to 1200 automobiles.

The terraced façade is heightened by a landscaped atrium covered by a soaring ninety-foot canopy of glass. The Grand Lobby level provides access to many retail shops and services, including a gift shop, video store, newsstand, office supplies store and a financial institution. The Grand Atrium is capable of serving as a banquet facility which can seat up to 700 or it can be transformed into a reception lobby accommodating 1200 guests. Attached to the Atrium is the Garden Restaurant and the Producer’s Club. The building has six cutting-edge screening rooms and a fitness center.

At this time, the Executive Operating Officer was N.P. Popich (financial partner) and Bruce Mallen as Chief Executive. The General Contractor for the project was the Turner Construction Company and the interior design firms included Integrated Design Associates and Depiero Associates.

In March of 1986, MGM/UA moved into the Filmland Corporate Center. By July, more tenants were occupying the building including The Motion Picture Export Association of America and the American Film Market Association.

At this time, after several years of negotiations, Lorimar Telepictures purchased the MGM Studio in Culver City. By the end of the year, MGM/UA moved out of their former studio lot and opened their new corporate headquarters in the Filmland Corporate Center.

By March of 1987, most of the MGM/UA personnel had moved off the MGM lot. About the same time, the historic MGM 15-ton sign that was once on the top of the tallest stage at the MGM studios was moved to the top of the Filmland Corporate Center building, and was relit in a ceremony with hosts Gene Kelly and “Leo the Lion.”