Amidst today’s hustle, bustle, and gridlock, it is nice to think back to a time before cars, when there were clopping hooves instead of purring engines, and the only horns were for music, or a bugle’s call. 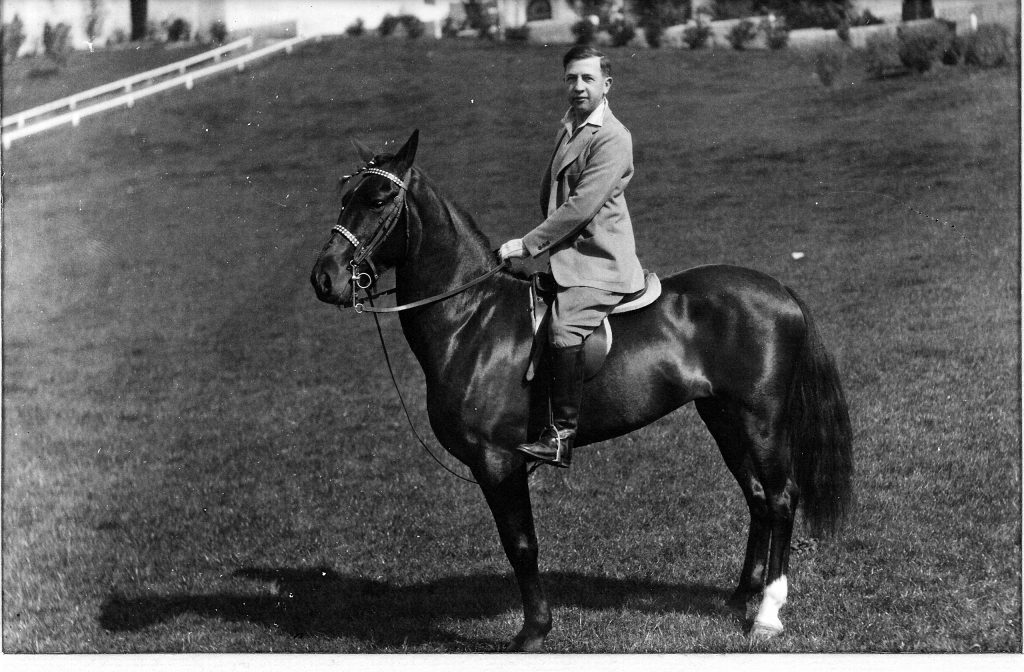 Harry H. Culver at the Pacific Military Academy he founded in 1922

Reveille would have been the morning clarion call at Camp Latham, the Civil War encampment near Overland and Jefferson where 2,000 soldiers and probably horses were stationed between 1861-1862.

But it was the Spanish missionaries (whose route El Camino Real is now marked with bells like the one found in the median at Sepulveda and Jefferson by Petco) that brought horses to Southern California, beginning with the Portolá expedition of 1769. Breeds such as the Chilean Criollo, Puerto Rican Paso Fino, and American Paso Fino begat the California Vaquero horse, and vaquero horseman culture, which was the beginning of the American working cowboy.

1819 saw our area’s most important equestrian event when Agustín Machado, following California use permit law, rode as far and wide as he and his horse could manage from sunup to sundown, claiming what was to be known as Rancho La Ballona.

Machado was famous as a horseman, for horse-trading, and grand fiestas for each family wedding and each birth of his 15 grandchildren, which always included horseracing and rodeos. The latter tradition may be the reason we have Rodeo Road (soon to be renamed Obama Boulevard), which begins in Culver City.

In 1922 Harry Culver founded the Pacific Military Academy. First located on Washington Boulevard and later moved to Cheviot Hills, it is where Harry taught his daughter Patricia how to ride sidesaddle, and it is also where the photo here of Culver on horseback was taken.

Besides transportation and military use, horses have always been used for sport and gambling, and Culver City was not immune. The city’s horse racing track opened in 1923, but by December 1924 it was replaced by “Los Angeles Speedway.” Eventually the infield became Carlson Park.

Horses were a huge part of Culver City’s movie history, from Thomas Ince’s silent Westerns to Gone With The Wind’s carriage and warhorses. During the 1930s-50s Charlie Flores was the livery stable owner who leant his horses to MGM productions.

In the 1950s, during the early days of Fiesta La Ballona, descendants of Culver City’s first families paraded on horseback. This tradition remains to some degree with the pony rides at the current day Fiesta.

Today, horse property in the Los Angeles area is few, far between, and disappearing fast. One day when the oil in Baldwin Hills dries up, that land should by all rights become a park. Perhaps with public stables named after Charlie Flores, and riding trails named after Agustín Machado.