This land was first traversed by Native Americans, called Tongva, later known as Gabrielinos. Under Spanish rule, it was settled as a portion of Rancho La Ballona. After Culver City was incorporated in 1917, the property became a horse racing track (1923-24), and in 1924, a reported 50,000 people attended the opening of “The Speedway,” a board racing track. This section was designated as “Victory Park,” the first city park, in 1927. The name was changed in 1964 by the city council to honor United States medical missionary, Dr. Paul Carlson, who was born in Culver City in 1928. Dr. Carlson was killed in 1964 while serving in the Republic of the Congo and he was survived by his wife and two children. In 1993, President William Jefferson Clinton addressed Culver City citizens in this park on health care. (marked Spring, 2010- corner of Braddock / LeBourget) 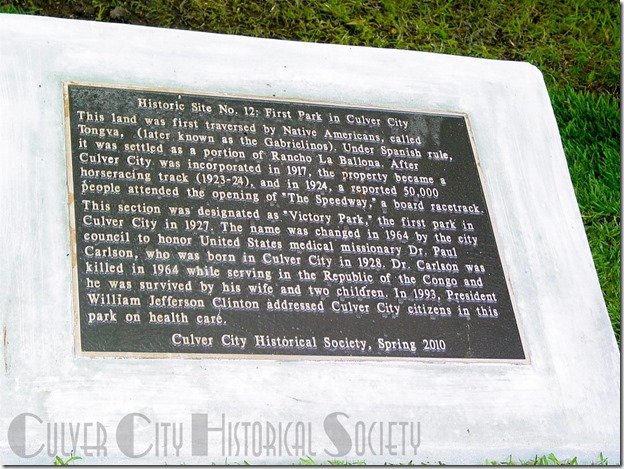