From 1927-1976, the backlot known as 40 Acres played host to Tarzan, Superman, Rhett Butler, King Kong, Captain Kirk, Batman, and Gomer Pyle. It was roughly bordered by Higuera to the north, Lucerne to the west, and Ballona Creek and Jefferson to the south and east, and though it may have been as large as 42 acres at first, it eventually became more like 29 acres due to the construction of Jefferson Boulevard, and flooding from Ballona C 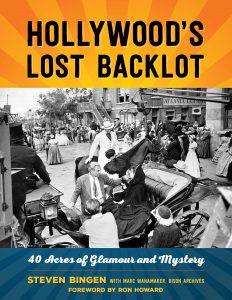 reek before it was paved over.

Today, the area that included and surrounds what was 40 Acres has become known for architectural marvels by Eric Owen Moss, offices that are home to companies like Apple’s Beats by Dre and restaurant Vespertine.

Authors and historians Marc Wanamaker and Steven Bingen will give a presentation based on their book Hollywood’s Lost Backlot: 40 Acres of Glamour and Mystery. There will be copies of the book for sale, and the authors will hold a book signing after the program.

The public is invited to this free program at 7pm on Wednesday, April 17. The entrance to the ARC is from the back parking lot.