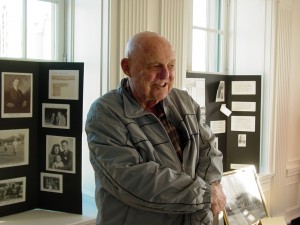 Dr. Charles Rozaire on Sept. 20, 2007, during the 90th anniversary of the city’s incorporation, which we celebrated with a party for the city at the Culver Hotel.

As a friend of the Historical Society, you have repeatedly heard our important message about the need for support, primarily though membership and volunteerism. Here, we highlight another way to donate – the transformative gift. At the end of 2015, the Society was given a sizable and generous gift by noted anthropologist, archeologist, and Historical Society member Dr. Charles Rozaire. Given in memory of his parents Arthur C. and Esther C. (Caldwell) Rozaire, this is one of the largest one-time gifts by an individual in the Society’s 35-year history.

Dr. Rozaire grew up in Culver City, attended Culver City Grammar School, and received his BA, MA and Ph.D. at UCLA. During his career, Dr. Rozaire served as Curator for the Southwest Museum, Curator of Archeology for the Los Angeles County Museum of Natural History; taught courses at UCLA, and participated in fieldwork for museums and universities across America. The author of several volumes focusing on archaeological investigations of early island settlements off the coast of California, his life’s work will continue to teach and feed the research of students and archaeologists for years to come.

In 2012, the Historical Society hosted Dr. Rozaire and fellow Society member Virgie Eskridge in a conversation about their early recollections of growing up as friends and schoolmates in Culver City. He also personally assisted the Society with our general research on Native Americans, some of which also was used in our displays. Currently writing his memoir, he has built a legacy that reflects his passion for archaeology, his family and roots in Culver City, and his philanthropic and pioneering spirit.