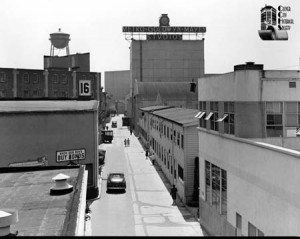 A new book has just been released that, I must confess, I believe is a wonderful addition to the history of “The Heart of Screenland.”

Co-authored by Julie Lugo Cerra and myself, Marc Wanamaker, Movie Studios of Culver City was a project discussed many years ago and has now been realized.

From Thomas Ince’s first historic movie studio to Metro-Goldwyn-Mayer and the forgotten early studios, Movie Studios of Culver City is a small treasure for those interested in Culver City’s “Reel” history.

The concept of creating the community of Culver City, using the movie industry as an economic base, came from Harry Culver himself along with the expertise of producer Thomas Ince in 1915. With Culver’s help, Ince built two major studios in the city – both of which are still operating. Almost since the city’s beginning, Culver City residents knew they were “home” when the Leo the Lion sign on top of MGM could be seen from miles around. By the 1930s the City seal incorporated “The Heart of Screenland.”

As the movie studios grew so did the economy and the film industry in Culver City flourished throughout the Depression, War years and into the modern era. By the 1930s, most of the city’s movie credits showed “Made in Hollywood.” The Culver City business community reacted to this by having the credit, “Culver City, where Hollywood Movies are made” instituted on films made in Culver City!

As the Studios Grew, So Did the Backlots

Over the years, Thomas Ince’s first studio in Culver City increased in size as backlots were added. That first studio operated under Ince/Triangle then, over the years, became Goldwyn, Metro-Goldwyn-Mayer, MGM/UA, Lorimar, Columbia and now Sony Pictures Studios.

Lot 2, across the street from the main studio on Overland Avenue was one of the five backlots of MGM Studios. Ince’s studio a quarter mile east on Washington Boulevard had its backlot called the “40 Acres” alongside La Ballona Creek. This backlot became famous due to the classic films made there such as DeMille’s King of Kings and Selznick’s Gone With The Wind.

The forgotten studios in the Culver City vicinity included, The Pacific, Master, Willat, Lehrman, and Romayne studios. These early studios flourished in the late teens of the early twentieth century and into the1920s during the silent era. The Pacific studio, however, was taken over by “sound” film producers in the 1930s and was still in production well into the 1940s.

Today, all of the studio backlots in Culver City are gone but can be found and remembered in Movie Studios of Culver City, a true Culver City historical treasure.