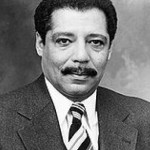 Julian Dixon devoted himself to public service for almost forty years. After graduating from UCLA, he was elected to the California State Assembly as a Democrat in 1972, and, after serving in that body for three terms, he was then elected to the U.S. House of Representatives from California’s 28th and 32nd Districts. Dixon won re-election to the 107th U.S. Congress, but died of a heart attack in December 2000.

Many sites and institutions have been named in his honor, including the Culver City Julian Dixon Library. On December 8, 2010, a photo plaque of the Congressman was unveiled in the lobby of the library in his memory. The City of Culver City can be extremely proud not only of Congressman Dixon’s work on behalf of our city, but on the high quality of our library.

Ed Johnson, one of Congressman Dixon’s staff members, worked with Supervisor Mark Ridley-Thomas and his staff to make this event/plaque happen for the library lobby. Ed has also arranged for two new items of Dixon history, to be donated to our archives. Both are from his time in the California State Assembly. Stop by and enjoy them!

The Culver City Julian Dixon Library has adult, teen and children’s materials in English with collections in Spanish, Japanese, Chinese, Korean and Vietnamese. The library contains over 207,945 books, a wide variety of magazine and newspaper subscriptions as well as substantial collections of DVDs, videocassettes, music CDs, and books on tape and compact disc. The library maintains a Judaica Collection and houses the Harriet Traeger Fiction Collection for the County of Los Angeles Public Library. The Culver City Julian Dixon Library is a selective government depository for federal and state documents.   With children’s storytimes, programs for teens and adults including guest speakers, book discussion clubs, music events and more, it is easy to understand why the Julian Dixon Library is one of the busiest libraries in the County of Los Angeles public library system.