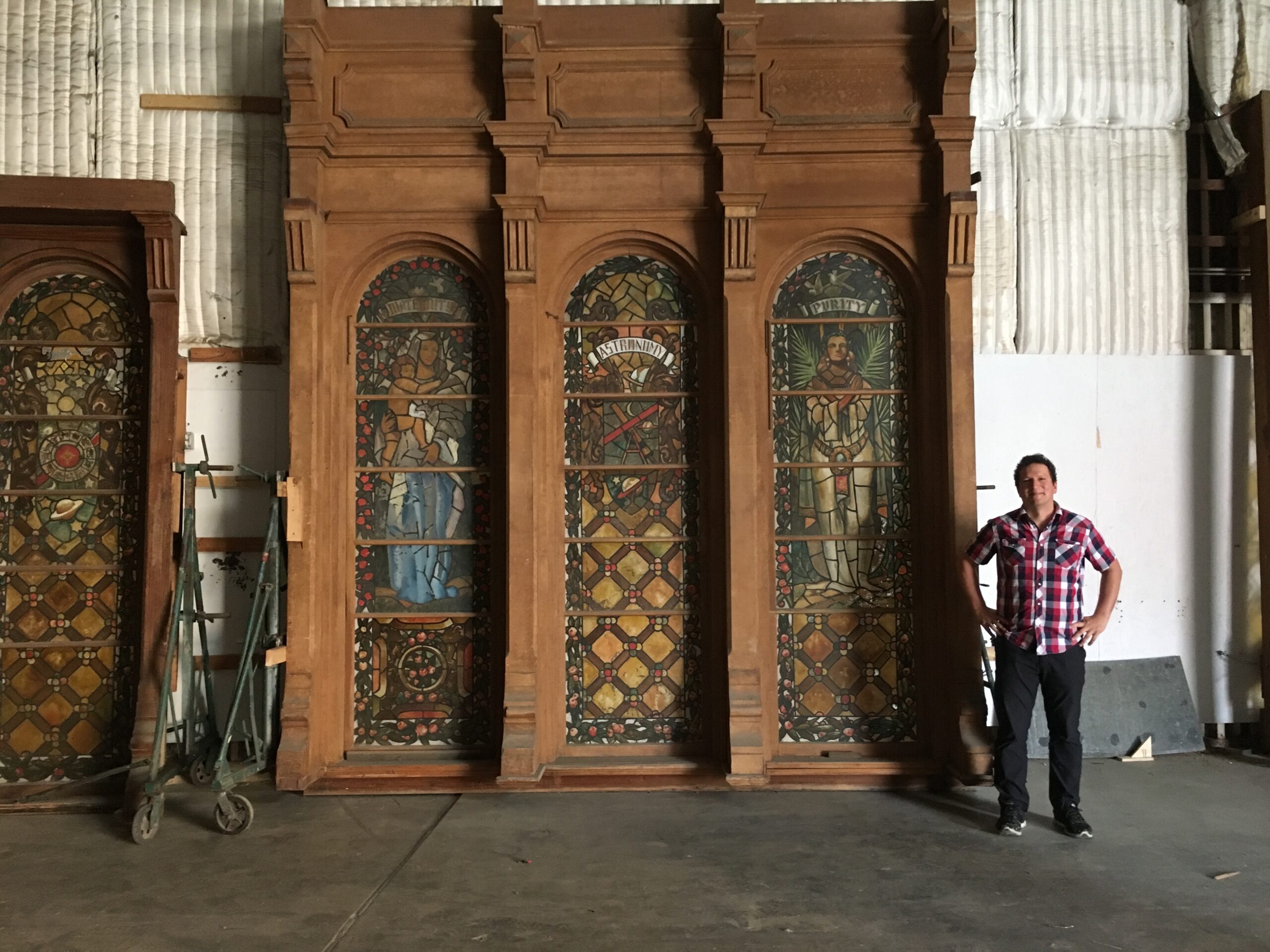 We have recently grown the Historical Society’s collection thanks to our amazing community of friends and members.

Last year, The Culver Studios and Hackman Capital Partners began conversations with the Society to discuss the future of four cinematic historic windows that had been hidden away for 80 years at The Culver Studios. One was from Gone with the Wind (1939), which can be seen in the final scene after Rhett has left Scarlett and she climbs the massive staircase. The other three are from The Magnificent Ambersons (1942), directed by Orson Wells.

It became evident during preliminary discussions with Steve Auer, VP of Operations for The Culver Studios, that the remodeling of the lot was prompting the urgency to find a home for all four windows. With the help of Society member Karim Sahli, we got to work figuring out a pressing challenge: If we got these massive set pieces, where would we store them, and how would we move them? While working through several scenarios, I received another call informing me that The Culver Studios and Hackman Capital Partners decided to restore the Gone with the Wind window and the two largest windows from the Ambersons and put them up for display on the lot. Historic preservation is alive and well in Culver City!

Steve then informed me that Hackman Capital wanted to gift our Historical Society the smaller of the Ambersons windows. Because our storage space is at a premium, there was some relief with their decision. After board approval and an introduction from past president Louise Coffey-Webb, we engaged the services of Elizabeth Patt of Patt Conservation to begin the preservation process. With restoration complete, we plan to install it in the Archives and Resource Center over the holidays and cannot wait to reopen for everyone to see.

If you lived on Fairbanks in the Lindbergh Park neighborhood, you might remember Woody and Martha Tolkien. Woody worked in Hollywood as a character actor, seen in hundreds of films. Their son, Eric, reached out to donate some wonderful pieces of Culver City history! We are excited to now have Culver Junior High yearbooks from 1955-57, a sign from MGM Studios, and a trolley stop sign. The Tolkiens were also longtime friends of another Fairbanks resident, Fred Parrish. (No relation to yours truly). Fred was a motion picture still photographer, and Eric donated many items of Fred’s that were used in his craft, and many photos that were part of Fred’s collection. Thank you, Eric!

Some time back a fellow Property Master, Tim Wiles, saw me at a prop house and said, “I have something for you…” While working on Francis Ford Coppola’s Bram Stoker’s Dracula on the Sony lot in 1991, he noticed a high stack of original seats from the original MGM theater on the main lot, the Cary Grant Theater, ready to be hauled away from outside of Stage 20. After asking if he could have a set of seats, they took up residence in his living room for a couple years, and then found their way to his storage unit where they sat for the next 20 years. When Tim heard about my connection with the Culver City Historical Society, he knew where the seats needed to go next. I called Chuck Eskridge, Hollywood stand-by painter and generational resident of Culver City, to ask if the seats could be restored to their original luster so we could display them in the ARC—which he did beautifully! We look forward to inviting you back to the archives to sit for a spell. Thank you, Tim and Chuck!

Laura (Ackerman) Shaw, Culver City High School 1977 graduate and childhood resident of the Lindbergh Park neighborhood, came across fan mail for Red Skelton while going through her mother’s possessions. Laura shared with us that her mother worked for Mr. Skelton and has donated 50-plus pieces of fan mail addressed to Mr. Skelton to the Society! Some of the letters were addressed to MGM Studios, but the majority were to his office in the Culver Hotel. Laura also donated a beautiful haberdashery display case that was her mother’s. Our VP of Museum and Archives, Tami Eskridge, cannot wait to add these items for display. Thank you to Laura and the Ackerman Family!

As a cinematographer, Mark Morris, Historical Society Media Archives Chair, has documented many people and filmed lots events of our local history. Mark has done a yeoman’s job digitizing these videos, building up our YouTube channel with videos featuring Red Skelton, Fred Machado, the Helms 1995 reunion, and our Sister Cities Kaizuka Project. Mark has also begun a new project for the Society, generously pairing his cinematic talents with interviewing local residents who have stories to share. If you have or know someone with a great story of our city’s history that could be lost, please email us. Collections are not built just with actual items, but also by documenting and continuing to build our oral histories.

Lastly (for now!), did you attend our program on Hollywood backdrops last year, which included four backings that the Society was gifted? (If you missed it, it can be viewed on our YouTube channel.) Following the program, we were contacted by Thomas Walsh of the Art Directors Guild, offering us a few more backdrops. Ever resourceful and always with a great idea, Mark reached out to our landlords at Veterans Memorial Building and Heather Moses, CCUSD Arts Coordinator, to inquire whether these backdrops might be of interest to the city’s public spaces. While these are ongoing discussions, it highlights that we at the Society continue to get creative in making room for all these wonderful pieces of Culver City history. If we can help find good homes for some pieces that will be cared for and used for education, we are happy to share the wealth!