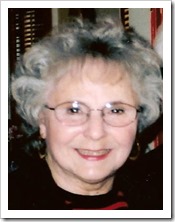 I am very proud of how the Culver City Historical Society was officially organized in 1980 and to see how it’s grown into a strong and vital organization, respected by our community and our sister historical societies as well.

It was not an easy task to persuade the City Officials to support us in forming the Society.  There had been some earlier attempts with no success.

However, in 1979, Frank McCann, an active community member, called on me and a small group of like-minded folks to help create an Historical Society that would celebrate and collect our city’s rich and varied history in an organized form for the present and future generations alike. Our first meeting was held at the home of John and Mildred Kearney [John retired as chief of CC Fire Dept.].

There are so many people who have contributed so much throughout the years, that I thought it might be appropriate to see how the Society has grown into the solid organization it is by profiling one of our current Board members as examples of what a variety of wonderful folks who have worked together for the past 30+ years.

I had the privilege of becoming the CCHS President once again in 2006 and was most fortunate to have found our current Costumes Chair, Louise Coffee-Webb, who has had a wealth of experience with costumes and preservation. This position was especially dear to me as I had worked on the costumes that had been rescued from the 1970’s MGM auction by the city, but left with the Society for safe-keeping.

Over the years, not only have these wonderful memories of cinema history been preserved, but now, with the ARC’s presentation area, they can again be seen and enjoyed by new generations. We now have the means and the dedicated volunteers to keep them in excellent condition, and change out the displays throughout the year. We certainly have come a long way since they were “temporarily” housed in the Vets tower!

Louise is but one example of so many outstanding and dedicated volunteers who have not only kept the Society going for over three decades, but who have helped to make it a widely respected and valued organization to the public.

As we begin our thirty-first year, my sincerest thanks go out to everyone who has cared about the CC Historical Society over the years and continue the work now and into the future.

I send my deepest wishes for a wonderful and productive 2011 – “HAPPY NEW YEAR” to all!