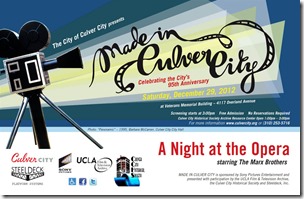 This year marks the 95th anniversary of Culver City’s incorporation. To celebrate, Made in Culver City, a free film program presented by the Culver City Parks, Recreation and Community Services Department, will screen A Night at the Opera starring The Marx Brothers, on December 29, 2012 at 3:00 p.m. in Veterans Memorial Auditorium at Veterans Memorial Building. Audiences are encouraged to also visit the Culver City Historical Society’s Archive Resource Center (ARC) from 1:00 p.m. to 3:00 p.m.

A Night at the Opera was the first film that The Marx Brothers made for Metro-Goldwyn-Mayer. The 1935 classic comedy stars Groucho, Chico, and Harpo Marx and satirizes high society, the opera world, and ocean cruises. The film was selected for preservation in the National Film Registry by the Library of Congress. Special permission for the screening has been provided by Warner Bros. Classics.

Made in Culver City celebrates the golden classics that were produced in “The Heart of Screenland.” The City of Culver City has a unique film legacy and has been the home to Thomas H. Ince Studios, Hal Roach Studios, DeMille Studios, Metro-Goldwyn-Mayer, Selznick International Studios, RKO Pictures, Pathe, Desilu and, currently, The Culver Studios and Sony Pictures Studios. Made in Culver City is sponsored by Sony Pictures Entertainment with participation by the UCLA Film & Television Archive, the Culver City Historical Society, and Steeldeck, Inc.

No reservations are required for this event. For more information, please click here or call the Culver City Cultural Affairs Hotline at (310) 253-5716.