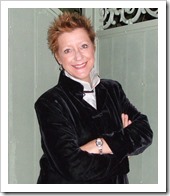 March 6th was a red-letter day for the costume collection at the Archives & Research Center (ARC), because it was the day that we finally completed the re-boxing of all 70-odd costumes from the famous MGM studio auction in 1970!

Why was re-boxing so significant? Well, it has been an ongoing project for the past couple of years, ever since we ordered special archival boxes of sufficient size and sturdiness not to crush some of the voluminous skirts and petticoats evident in mid-20th Century film costumes, often depicting silhouettes of bygone eras.

Metal-edged and acidic tags (sometimes original from the auction) were removed and replaced with archival tags, in keeping with current museum standards. Descriptions and condition reports were made and photographs taken – all of which information was then entered into our database system.

The old, decrepit acidic boxes, going back to the 1980s, were unceremoniously placed in the building’s dumpster, and a great relief was felt by all!

This feat was accomplished with the seasoned help of two Woodbury University Fashion Design graduates, Karla Contreras and Ashley Evans. While each has worked with cataloguing costume collections before, both commented on the extraordinary workmanship of these MGM costumes, the likes of which they had never seen before.

In our ongoing effort to make available to the public as many of these costumes as possible, we rotate our mannequin displays so that you can enjoy them and learn a little film history while doing so.

Ms. Jones, who passed away on December 17th, 2009 at the age of 90, was acknowledged at this year’s Academy Awards. She was born Phylis Lee Isley in Tulsa, OK, and had a film career that spanned almost four decades, earning her five Oscar© nominations and winning for Best Actress in 1944 for The Song of Bernadette, at the age of 25. Many of her films have become classics, including Duel in the Sun, Love is a Many-Splendored Thing and Portrait of Jennie.

The costume on display was designed by Walter Plunkett, famous for designing the costumes for Gone With The Wind.

Our second mannequin case features an elaborate, colorful and be-tassled dancer’s costume worn by actress Sono Osato as Bianca in MGM’s The Kissing Bandit, also from 1949. This musical starred Frank Sinatra and Kathryn Grayson (who passed away on February 17, 2010, at the age of 88).

This film also depicted the early 19th Century, and its costumes too were designed by Walter Plunkett. It represented the clothing of the Californios, the early residents of New Spain before it (California) became part of the United States. Plunkett researched the period from surviving garments in rare collections at the Los Angeles County Museum of History, Science and Art, now known as the Natural History Museum of Los Angeles County.

We hope you will find time to visit these costumes (as well as many other historical delights on display) on the first and third Saturday afternoons of each month.