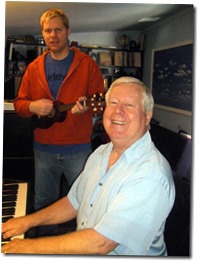 The Culver City Historical Society will feature the history, music, songs and stories from MGM’s Broadway Melody musical movies produced between 1929 and 1944 at its general meeting on Wednesday, April 18, 2012, at 7 p.m. in the Veterans Memorial Building’s Multipurpose Room, 4117 Overland Avenue, Culver City, 90230

The program, presented by tenor Winston Gieseke and pianist Stephen Fry, the latter a member of the CCHS Board, will offer a musical and narrative review of original songs from the immensely popular series of Broadway Melody film productions made in the “Heart of Screenland.” Mostly composed by Arthur Freed and Nacio Herb Brown, the tunes will include the popular hits, “You Were Meant for Me,” “The Wedding of the Painted Doll,” “All I Do is Dream of You,” “Temptation,” “Singin’ in the Rain,” and many more. Song sheets will be provided for several of the pieces for a sing-along.

The Broadway Melody of 1929 was the first sound film to win an Academy Award for Best Picture. It was one of the first musicals to feature a Technicolor sequence, which sparked the trend of color used in a flurry of musicals that were made in subsequent years. It was the first musical released by Metro-Goldwyn-Mayor, and the first all-talking musical.

Winston Gieseke has studied music theory and filmmaking, which serves him well in his various careers as a writer, performer, and aspiring circus freak. He has written for television shows like Hollywood Off-Ramp and Wildfire and penned the made-for-cable movie Romantic Comedy 101, which starred Tom Arnold and Joey Lawrence. He has also performed the National Anthem at several L.A. Dodgers games, and last year enjoyed a sold-out, two-night gig at M Bar in Hollywood. He has served as Managing Editor of The Advocate, a national LGBT news magazine, and recently finished a two-year stint as museum chair at the Culver City Historical Society. His passions include history, criminology, the musicals of Stephen Sondheim, and just about anything Italian. He counts Henry Rollins and Patty Hearst among his many influences. Winston’s debut album, On the Edge, will be released later this year by LML Music.

Stephen M. Fry, former VP for Programs, has lived in Culver City with his wife Frances Talbott-White since 1975. He retired several years ago after a 30-year academic career at UCLA, but continues to write for academic journals. An avid coin and stamp collector, he recently completed the definitive article on music topical stamps issued by the U.S. Postal Service for the multi-volumed Grove Dictionary of American Music, 2nd ed. For more than a decade he contributed a weekly newspaper column, called “Music To My Ears” to the Culver City News, and has just completed a book on the country dances published in The Gentleman’s Magazine from 1744-1757. He is a pianist who performs popular music, jazz and sometimes country dance music in many local clubs, hotels and casual venues. He directs the Westside Jazz Ensemble, an exciting big band established in Culver City in the late 1970s, and Razzmatazz, a jazz and pop music combo. He joined the Historical Society a few years ago, after presenting a program at their general meeting on the history of music in Culver City.

All members of the CCHS and the public are welcome to enjoy this free program and students are encouraged to attend. The entrance to the Multipurpose Room is through the back of the building near the parking lot, and through the ARC space.