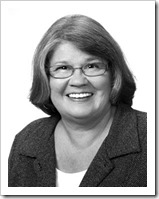 There seems to be a lot of interest in local history, which is very encouraging! New businesses even call to learn about the story of their site (often some fun surprises there!)

Children are especially great fun on tours. We are scheduled to work with students from El Marino Language School in 2011 on May 31 and June 3.

They will be bussed to the City Hall, where half of the students visit the Police Department and meet some of our City’s “finest.” The others will tour the Mike Balkman Council Chambers for an overview of early city history and a primer on the City Hall/ etiquette for the chambers. Next, teams will head out on a “Historic Scavenger Hunt” with parent and teacher chaperones. They basically “hunt for information.”

Japanese Immersion Program teacher Alice Horiba has been the prime mover of this annual trip, and with her creativity and our historical help, she has designed this “scavenger hunt.” The tours began as simple walking tours but they have transitioned in to a wonderful participatory morning of what I call “painless education.”

A “Foodie Tour” & Sharing History with the Ladies

Some upcoming fun on my plate will include a “Foodie Tour” which will have a group walking through a historic tour of downtown Culver City in April – to see the many new and diverse eateries that have sprung up (and gotten wonderful reviews, locally and nationally!) all over the area!

The CC Woman’s Club asked me to speak on local history at their January meeting, and they gave us nice donation. They have also booked another visit to the Archives this coming April.

Culver City’s Marathon dates back to 1914!

In preparation for our visiting marathon runners, I dug back into my files. Did you know Harry Culver hosted a marathon in 1914, with 60 participants followed by a cavalcade of cars? This exercise in drawing crowds via marathons continued until WWI.

The next experience with marathons was the 1932 Olympics, when Helms Bakery supplied foodstuffs to the nearby Olympic Village.

Our Western Hemisphere Marathon, which was the longest continuous marathon on this side of the country, began in 1948.

And of course, many remember the festive banners hanging along the two-mile stretch of the 1984 Olympic Marathon route through our city. The runners came off the Marina Freeway, across Hannum, 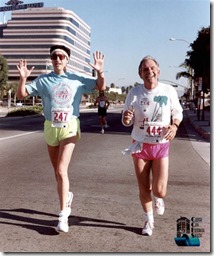 up Playa to Overland, then to Jefferson, which took them back to the Coliseum. That year, Culver City not only had the Olympic Headquarters at the western edge of town (where the Costco store stands today), but it was the first year for a Women’s Olympic Marathon!

(Above right) The photo of the 1990 Western Hemisphere Marathon shows city streets and the MGM sign (upper left), which was removed in 1992. Former Culver City Mayor Paul Jacobs (L) and Dan Cohen (R) have both have run many marathons, notably in our sister city’s Senshu Marathon in Japan.