Culver City’s history always amazes me! From early times when our Native Americans traversed this area, using natural resources wisely, to our Spanish ancestors who shared their customs, to the continuing influx of amazing immigrants who expand our cultural wealth every day. 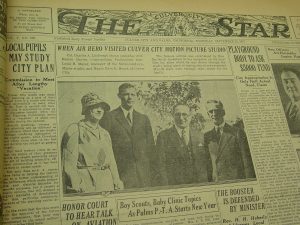 Newspapers serve as incredible sources of information from early times on a daily basis! Our Culver City Historical Society has been lucky to receive, save, and protect early newspapers like The Culver City Star, Evening Star News and The Citizen. The front page pictured is dated September 22, 1927 and notes that it is “Published Daily Except Sunday.” It clearly validates our information that Col. Charles A. Lindbergh, who is posed next to movie actress Marion Davies, visited the M-G-M movie lot, and met Louis B. Mayer, who was “manager of the Metro-Goldwyn-Mayer studio.” Culver City’s mayor, Reve Houck, is pictured on the far right. Note the studio is illustrated above, with the Washington Boulevard frontage. Palms is recognized to the north, also on the right. 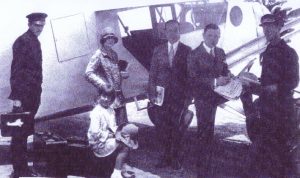 Many of you are aware that we had a “Culver City Airport” which was in the area of Jefferson and Sepulveda Boulevards. City founder Harry Culver kept his plane there, and it was from that airport that Culver flew across the country with his wife Lillian and daughter Patricia, during his tenure as president of the National Real Estate Association. Our collection includes a book of letters, clippings, and photos documenting that trip. Many years ago, I received a call from a church in the Inland Empire asking if we would like a book of Culver photos. After rescuing the amazing treasure, the Society surprised the

Culvers’ daughter, Patricia Culver Battle, by returning it to her at one of our meetings. A delighted Patricia graciously turned the table on us and left it in our care. We are grateful that Patricia’s descendants, who now live out of state, continue to support our society with photos and details of Culver history! 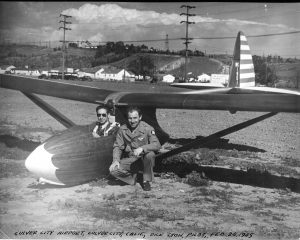