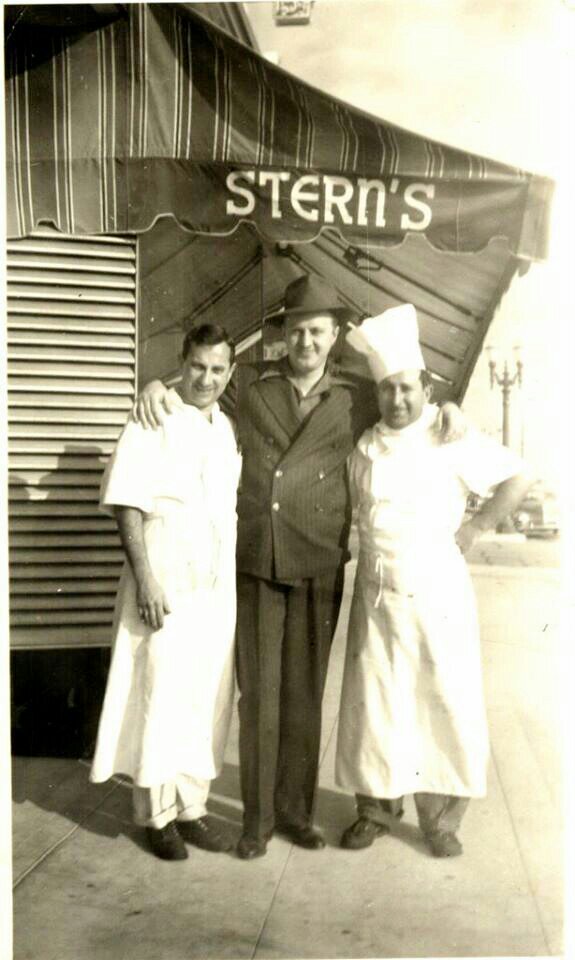 Sam Stern is pictured on the right. Do you recognize the other two men from the early days at Sterns?

With Labor Day having signaled the unofficial end of barbecue season, we wanted to take a look back at much loved and much missed Stern’s Famous Barbecue.

Located at 12658 West Washington Blvd., Stern’s attracted fans from far and wide. Opened in 1922 by Isidor Stern, a Texas butcher, Stern’s eventually included a 32-room motel as part of the operation. Isidor’s nephew, Hal, was the last owner before a 1983 fire lead to the restaurant’s closure. Though the restaurant could have been rebuilt, their kitchen setup was grandfathered in, and updated fire codes meant the recipes couldn’t be replicated. Hal Stern moved to Flagstaff, Arizona, where he became a real estate broker and horseman.

Stern’s barbecue sauce is the legend that lingers, which many recall as being brown-orange instead of the usual red color, served hot with meaty bits. Many have speculated that the sauce contained XLNT chili con carne. Or maybe there was Coca-Cola? Possibly mustard?

Users of roadfood.com were able to contact Hal Stern in an attempt to get the recipe. The secret, according to Hal, were drippings and trimmings from the meat that were ground up and added to the sauce. He was reluctant to divulge the list of other ingredients, but also stated that, since their barbecued meat was included in the sauce, it is impossible to replicate in any case.

While Stern’s Famous Barbecue is long gone, Culver City’s barbecue tradition lives on. Outdoor Grill, celebrating its twentieth year in operation, opened just down Washington Blvd. from where Stern’s was located, Santa Maria Barbecue has been going strong for over a decade, and over the past year both Holy Cow BBQ and Maple Block Meat Co. opened on Sepulveda Blvd. And for those who wish to continue the sauce search, there is even a Facebook group started by Isidor’s great-grandson Jeff Mudrick, who longs for the days of “Hickory Smoked Meats for a Robust Treat,” along with everyone else in the know.