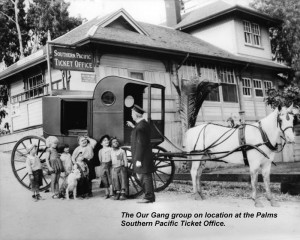 Since the founding of Culver City, the motion picture industry, which helped found the small city’s location filmmaking in and around the town, was the closest option for location managers.

The Culver City Pacific Electric Station on Washington Boulevard had been used on-and-off for many years by the nearby studios.

The depot in Palms, the oldest city (1886) to be annexed to the City of Los Angeles (1915), often appeared in the movies as a rural train station. By 1939, the station was no longer in use except by film companies such as MGM Studio.

Once located near Exposition and National Boulevards, the station was used with various old movie trains for period films for over fifty years.

The building was abandoned and was going to be demolished due to the rail line’s closure. Preservationists were able to save the station which was eventually moved in the 1970s to the Heritage Square Museum, off the Pasadena Freeway—where it stands today as a reminder of the great rail system Los Angeles once enjoyed.

[Ed. Note: The top room of the building was once used for Boy and Eagle Scouts’ meetings in the 1950s!]