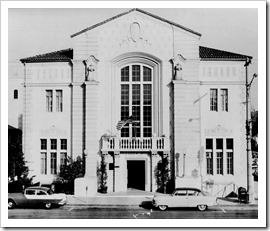 This 1928 City Hall was dedicated as the first structure built specifically as a city hall. In prior times, the city offices were located in structures on Van Buren Place (still standing, across from the theatres), and on the second floor of the first theatre, which was located on the site of Harry Culver’s landmark Hotel Hunt, now the Culver Hotel. The city offices operated in interim structures at the corner of Culver Boulevard and Overland Avenue, until the dedication of the new city hall on June 17, 1995. The 1981 marker was relocated in the grassy area on the corner of Culver and Duquesne.

This city hall was used in many movies, like Laurel and Hardy’s “County Hospital,” and it served as the police department in the “Hunter” television series. 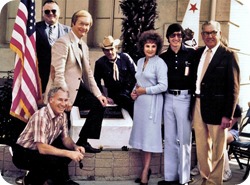 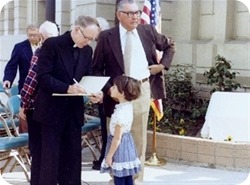 Getting ready to unveil the marker, Rev. Coombs from St. Augustine’s Church, who offered the invocation, signed the guest book for 3rd generation Society member Michele Cerra. Sites Chair Charles R. Lugo stands behind. At far left, Syd Kronenthal, Culver City Parks and Recreation director.The bronze marker pictured sits in the grassy area on the corner of Culver and Duquesne, on the city of the new city hall which opened on that site in 1995. 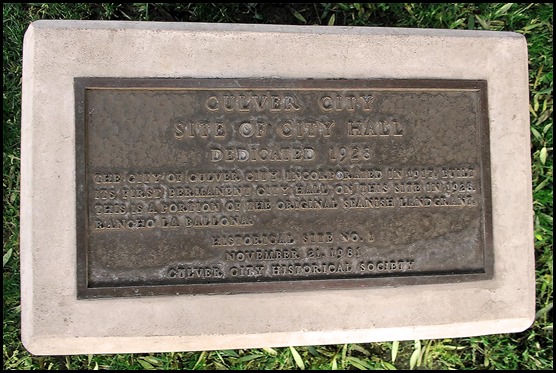