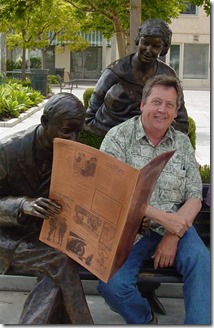 Harry Culver’s dream that became Culver City is inspiring. Young Harry was not rich. But he had a plan. Many said it was risky starting a town in the middle of nowhere. But his idea became reality. Today, Culver City stands proud.

As Harry Culver’s grandson, people ask me if Harry’s success came from some secret technique. The answer is, “Yes.” He often called it the “Culver Way.” He developed a thoughtful marketing strategy plus a set of rules that relied on optimism, honesty and hard work.

7. Responsibilities are not handicaps. They are stepping stones.

My grandfather would later advance to President of both the California and National Association of Realtors. Many major newspapers in the mid-1900s reported that he continued to promote these same rules across the country.

Harry Culver’s full marketing strategy is a longer story. But just looking at these seven rules reveals Harry Culver’s integrity. It’s easy to see that he truly looked beyond “just selling” and cared about the people and businesses wanting to call Culver City their home.