It was my great pleasure to meet the legendary director George Sidney just before the turn of the millennium, while I was program director for the American Cinematheque. I was concurrently the newsletter editor of our Society newsletter, Culver Historical Highlights. George was kind enough to write a piece for the Winter 2000 newsletter, entitled “Dream Street,” his homage to Washington Boulevard. In my view, this was his love letter to the film history of Culver City. Enjoy these excerpts and visit our website for his entire article. 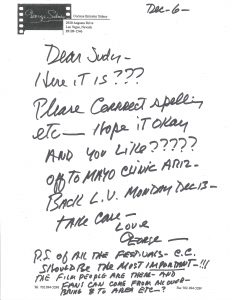 Everyone has a favorite street—Broadway, Bond Street, Canal Street, Rue de la Paix, State Street, Via Veneto, even the Yellow Brick Road. I first saw mine and walked on my “dream street” in 1930: Washington Boulevard in Culver City.

My footprints shared the path with the entertainment greats—factual, historical and fictional who worked at the studios of the reel cinema world which were created and built along its curbs, such as Triangle, MGM, RKO, Pathé, and Desilu.

From Ince, DeMille, Mayer, Roach, and Selznick came forth a mecca of creativity which encouraged the talents of Thalberg, Freed, Stromberg, Welles, Ford, Stevens, Capra, and Flemming, as well as Minnelli, Lubitsch, Wilder, Leonard, Frankenheimer, and Spielberg, among so many others.

My footsteps echoed alongside those of the Munchkins, Garbo and Lassie, Trader Horne and Lena Horne, Clark Gable and Captains Courageous, Lawrence Tibbet and Elvis (along with Frank and Bing), Astaire and Kelly, and the Nicholas Brothers.

I watched Mickey and Judy grow up; Our Gang remaining kids forever; Tom and Jerry wreaking havoc. I experienced the burning of Atlanta and Gone with the Wind, the San Francisco earthquake, locusts and The Good Earth, and Singin’ in the Rain.

I strutted along with all of these stars and celluloid giants who paved the way for those who will continue to matriculate on this street for the entertainment of 2000 and beyond. It all happens on my “dream street” in Culver City.