As some of you might know that clues to the production history of many costumes in our MGM collection can be found in the hand written cloth tags that we find sewn inside.

The tags are inscribed in ink with various information such as a film production number, the name of the actor who wore the costume, size measurements, an original inventory number and even a dry cleaning number. 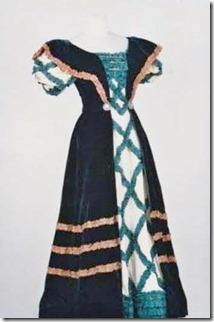 Unfortunately, not all of our MGM costumes have any or all of the above tag information. A case in point is the spectacular emerald green silk velvet and ivory taffeta gown featured in this season’s costume display.

The gown is reminiscent of an 1830s era evening dress with fitted velvet “outer” dress including a wide shawl collar ending at the waist in points marked by silver beaded buttons. It is open at the front to reveal an ivory “inner” panel and matching ivory sleeves.

The round puff shaped sleeves, aptly called “beret sleeves”, are supported inside by a clever combination of celluloid ribs and pleated organdy. Ruched green taffeta with pinked edges is applied to the cream silk front inset panel and sleeves in a lattice pattern. Rows of ruched and pinked taffeta in fawn color embellish the velvet skirt and collar edge.

A careful examination of voluminous layers of linings reveals tags that tell us only the size, Bust 34, Waist 26 and an inventory number #65. Additional information about the film origin for this very romantic and sumptuous silk gown would be extremely welcome!

OTHER COSTUME ON DISPLAY HAS IDENTIFICATION

In contrast, thanks to label tags we have lots of information on the other costume on display. This dance costume with renaissance period details includes a deep blue tunic with short sleeves and “slashed” details and gold metallic embroidered belt. The tunic is worn over a lilac colored shirt with pointed collar and long sleeves.

The costume not only has a tag identifying Helen Wood as the actor but also a tag with the film production number for Give a Girl a Break.

In the film story Broadway producers vie for their favorite performers, who are showcased in a series of musical and dance scenes, in order to chose a replacement to star in an upcoming Broadway production.

Give a Girl a Break was filmed in the Metro-Goldwyn-Mayer Studios at 10202 W. Washington Blvd. and truly was “made in Culver City”. It was released on December 3, 1953.

One of the unwanted surprises following those special holiday dinners is discovering drops and dribs of candle wax stuck on your holiday clothing and linens, whether it be a favorite tie, a new silk scarf or heirloom lace tablecloth.

Yes, grandmother did say to apply a hot iron over brown paper to melt and disperse the wax onto the paper. However, all too often the result is a stiff spot of wax residue absorbed into the cloth or worse yet, a burn spot.

Give this method a try instead. Tightly wrap an ice cube in a thin towel and apply it to the wax spots until they are frozen. Then gently pick off the frozen bits of wax with tweezers. Any small bits of wax left in the cloth weave will probably be flushed out with the next washing or dry cleaning. Best of all, the process is infinitely less dangerous to you, your clothing and linens.