I could write thousands of words of what I learned about Harry Culver and his family on my two recent trips to Nebraska over the last eight months. 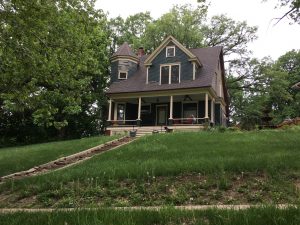 It all came into focus when I learned that Harry moved to Omaha in 1908. He became the manager for real estate developer George P. Bemis. Harry purchased a home in the Bemis development at 3401 Hawthorne adjacent to the Bemis Park. I drove through that neighborhood and found his home beautifully located up on a hill just north of downtown (see photo).

The following year, Harry decided he should go into business for himself and opened his own brokerage office in Omaha’s National Bank Building. He sold large parcels of farm land, offering exchanges of property with merit. “We make a specialty of exchanging Property.”

When Harry arrived in California, as many know, he worked with Isaac Newton Van Nuys, developing the valley. In my opinion, what he learned from Van Nuys, Bemis, his father, and others provided him the tools that he needed to take on this task of developing his own city.

Not stopping there, he became president of the National Association of Realtors, flying around the country, giving hundreds of speeches each year. When I was in Nebraska, I felt a familiar sense of home. One telling sign, it occurred to me that no matter the size of the town I visited, there was a park in each neighborhood. I have read that one of the requirements Harry Culver instilled in his developers was that they should have a park in their neighborhood plan. Coincidence? Culver City has ten parks and five elementary schools that give our children and families a place to gather, learn, and enjoy.

Is this why our town is so unique? Could it be why many say Culver City is a “model city”? Harry H. Culver gave to my family and many others a beautiful city with jobs, homes, and community. Thank you, Harry Culver, for your vision, passion, and service to the world.