After 30 years, it is still gratifying to see our CC Historic Society continue to grow and become more of a resource. Our physical site and collections are always improving, and we now have our own website, thanks to Winston Gieseke, VP, Museum/ARC. We will be linking to museum sites, such as the Sony Pictures’ virtual museum and other pertinent resources, including the City and the Chamber of Commerce, who will be linking to us!

You might remember that when Sony Pictures Entertainment took over the historic first major studio in our city, the studio’s property department was depleted, having been sold at auction in the early 1970s by M-G-M.

Since Sony Pictures was just beginning its history in Culver City, they established a web-based museum, and they also created a space in Sony Pictures Plaza, to showcase their archives. It is open to the public, and in addition to changing displays, they have a kiosk for visitors to access the online museum. (Note the article on their award-winning website here.)

CCHS Hosts a Variety of Visitors

This summer, we took a group of Brandeis University ladies on a tour of the Archives and also walked them around Downtown. Special thanks to Joy Jacobs and Fred Yglesias for their assistance and to the Brandeis ladies for their donation. We also enjoyed a visit in late August from thirty marvelous young people from the Parks and Rec. summer Camp, “Just4Kids.” The nine and ten-year-olds were amazingly aware of local history and full of questions – and answers!

Local History through Interviews & on Film

Katherine Maxwell, who is now a senior at Culver City High School, has been busy working on her Girl Scout Gold Award. Katherine, who attends Culver High’s Academy of Visual and Performing Arts (AVPA), has interviewed a number of locals with a history for this project. These include Martha and Sol Sigall, Bill Wynn, Howard Zager, and myself, along with some “newcomers.” The end product is a ten-minute film entitled History is Gold, which contains numerous historic photos integrated into the story of our city. You will have an opportunity to see this film at special showings in the Archives.

It is always nice to see our Society members “out on the circuit.” I enjoyed visiting the Venice Historical Society meeting recently, when our shared member, Bill Hahn, presented some of his memories of Venice and Mar Vista! 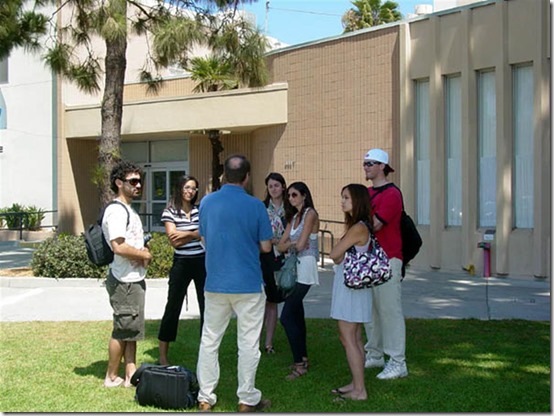 Isn’t it great to see increasing interest in Culver City? “One Square Mile” is Assoc. Professor Andrew (Sandy) Tolan [above, back to camera]’s project for his second-year grad students at the USC Annenberg School for Communication.

The project is co-sponsored with the new “Culver City Patch.” The CCHS hosted the students at the ARC on August 27, 2010. The Chamber of Commerce provided maps (It is HARD to find any square mile in our city!) and Steve Rose and I offered a bit of background information so the students could focus on which areas might offer the best study opportunities.

Go to CulverCity.Patch.com and you will see what they are doing!