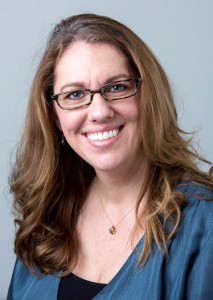 Culver City native Michelle Bernardin has been named president of the Culver City Historical Society upon the resignation of former president Louise Coffey-Webb.

Bernardin’s roots in Culver City go back to her father, Roger, whose family moved from Santa Monica to the west side of Culver City in 1956. She attended St. Augustine’s School and then followed her dad’s steps to Culver City High School. She is a Bruin, studied art history at UCLA, and continued her graduate work in art history and museum studies at Tufts University in Massachusetts.

She has been at Loyola Marymount University for the last three years as Associate Director of Development of Women and Philanthropy, and the program director of the LMU Women’s Leadership Council. Prior to that, she spent ten years at the Museum of Contemporary Art, managing the museum’s two volunteer support councils and the internal logistics for the annual fundraising events.

For the past three years, she has been a member of Cultural Affairs Commission for the City of Culver City.

She is an avid foodie, enjoys baking in the kitchen, and loves sharing the exploits of both on social media.